What does it mean to be overthrown? In colloquial terms, it means to disappear. But in what way? Who could make an entire city overthrown? It is impossible for man to perform such an act, of course. These people were no fools; as soon as they heard this proclamation, they caught the idea. They knew that it had come from God; they knew that God was going to perform His work; they knew that their wickedness had enraged Jehovah God and brought His anger down upon them, so that they would soon be destroyed along with their city. How did the people of the city behave after listening to Jehovah God’s warning? The Bible describes in specific detail how these people reacted, from their king to the common man. As recorded in the Scriptures: “So the people of Nineveh believed God, and proclaimed a fast, and put on sackcloth, from the greatest of them even to the least of them. For word came to the king of Nineveh, and he arose from his throne, and he laid his robe from him, and covered him with sackcloth, and sat in ashes. And he caused it to be proclaimed and published through Nineveh by the decree of the king and his nobles, saying, Let neither man nor beast, herd nor flock, taste any thing: let them not feed, nor drink water: But let man and beast be covered with sackcloth, and cry mightily to God: yes, let them turn every one from his evil way, and from the violence that is in their hands. …”

After hearing Jehovah God’s proclamation, the people of Nineveh displayed an attitude utterly opposite to that of the people of Sodom—the people of Sodom openly opposed God, proceeding from evil to evil, but after hearing these words, the Ninevites did not ignore the matter, nor did they resist; instead they believed God and declared a fast. What does “believed” refer to here? The word itself suggests faith and submission. If we use the Ninevites’ actual behavior to explain this word, it means that they believed God could and would do as He said, and that they were willing to repent. Did the people of Nineveh feel fear in the face of imminent disaster? It was their belief that put fear in their hearts. Well, what can we use to prove the Ninevites’ belief and fear? It is as the Bible says: “and they proclaimed a fast, and put on sackcloth, from the greatest of them even to the least of them.” This is to say that the Ninevites truly believed, and that from this belief came fear, which then led to fasting and the donning of sackcloth. This is how they showed the beginning of their repentance. In utter contrast to the people of Sodom, not only did the Ninevites not oppose God, they also clearly showed their repentance through their behavior and actions. Of course, this did not only apply to the common people of Nineveh; their king was no exception.

When the king of Nineveh heard this news, he arose from his throne, took off his robe, dressed himself in sackcloth and sat in ashes. He then proclaimed that no one in the city would be allowed to taste anything, and that no livestock, lambs and oxen would graze or drink water. Man and livestock alike were to don sackcloth; the people would earnestly entreat God. The king also proclaimed that every one of them would turn away from their evil ways and forsake the violence in their hands. Judging from this series of acts, the king of Nineveh demonstrated his heartfelt repentance. The series of actions he took—arising from his throne, casting off his king’s robe, wearing sackcloth and sitting in ashes—tells people that the king of Nineveh laid aside his royal status and wore sackcloth alongside the common people. This is to say that the king of Nineveh did not occupy his royal post to continue his evil way or the violence in his hands after hearing the announcement from Jehovah God; rather, he laid aside the authority he held and repented before Jehovah God. At this moment the king of Nineveh was not repenting as a king; he had come before God to confess and repent his sins as an ordinary subject of God. Moreover, he also told the entire city to confess and repent their sins before Jehovah God in the same manner as him; additionally, he had a specific plan for how to do so, as seen in Scripture: “Let neither man nor beast, herd nor flock, taste any thing: let them not feed, nor drink water: … and cry mightily to God: yes, let them turn every one from his evil way, and from the violence that is in their hands.” As the city’s ruler, the king of Nineveh possessed supreme status and power and could do anything he wished to. When faced with Jehovah God’s announcement, he could have ignored the matter or simply repented and confessed his sins alone; as for whether or not the people in the city chose to repent, he could have completely ignored the matter. However, the king of Nineveh did not do this at all. Not only did he arise from his throne, wear sackcloth and ashes and confess and repent his sins before Jehovah God, he also ordered all people and livestock within the city to do the same. He even ordered the people to “cry mightily to God.” Through this series of actions, the king of Nineveh truly accomplished that which a ruler should; his series of actions is one that was difficult for any king in human history to achieve, and also one that none achieved. These actions can be called unprecedented undertakings in human history; they are worthy of being both commemorated and imitated by mankind. Since the dawn of man, every king had led his subjects to resist and oppose God. No one had ever led his subjects to entreat God to seek redemption for their wickedness, receive Jehovah God’s pardon and avoid imminent punishment. The king of Nineveh, however, was able to lead his subjects to turn to God, leave their respective evil ways and abandon the violence in their hands. Furthermore, he was also able to put aside his throne, and in return, Jehovah God turned and repented and retracted His wrath, allowing the people of the city to survive and keeping them from destruction. The king’s actions can only be called a rare miracle in human history; they can even be called a model of a corrupt humanity confessing and repenting their sins before God.

After listening to God’s declaration, the king of Nineveh and his subjects performed a series of acts. What is the nature of their behavior and actions? In other words, what is the essence of the entirety of their conduct? Why did they do what they did? In God’s eyes they had sincerely repented, not only because they had earnestly entreated God and confessed their sins before Him, but also because they had abandoned their wicked conduct. They acted this way because after hearing God’s words, they were incredibly frightened and believed that He would do as He said. By fasting, wearing sackcloth and sitting in ashes, they wished to express their willingness to reform their ways and refrain from wickedness, to pray for Jehovah God to restrain His anger, to entreat Jehovah God to withdraw His decision as well as the catastrophe about to befall them. Through examining all of their behavior we can see that they already understood that their previous wicked acts were detestable to Jehovah God and that they understood the reason why He would soon destroy them. For these reasons, they all wished to utterly repent, to turn away from their evil ways and abandon the violence in their hands. In other words, once they became aware of Jehovah God’s declaration, each and every one of them felt fear in their hearts; they no longer continued their wicked conduct nor continued to commit those acts hated by Jehovah God. Additionally, they entreated Jehovah God to forgive their past sins and to not treat them according to their past actions. They were willing to never again engage in wickedness and to act according to Jehovah God’s instructions, if only they would never again infuriate Jehovah God. Their repentance was sincere and thorough. It came from the depths of their hearts and was not feigned, nor was it temporary. 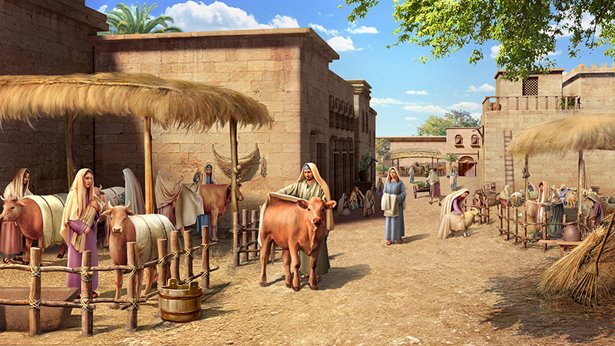 Once the people of Nineveh, from the supreme king to his subjects, learned that Jehovah God was angry with them, every single one of their actions, the entirety of their behavior, as well as every one of their decisions and choices were clear and plain in the sight of God. God’s heart changed according to their behavior. What was God’s frame of mind at that very moment? The Bible can answer that question for you. As is recorded in Scripture: “And God saw their works, that they turned from their evil way; and God repented of the evil, that He had said that He would do to them; and He did it not.” Although God changed His mind, there was nothing complex about His frame of mind. He simply went from expressing His anger to calming His anger, and then decided not to bring the catastrophe upon the city of Nineveh. The reason why God’s decision—to spare the Ninevites from the catastrophe—was so swift is that God observed the heart of every person of Nineveh. He saw what they held in the depths of their hearts: their sincere confession and repentance for their sins, their sincere belief in Him, their deep sense of how their wicked acts had enraged His disposition, and the resulting fear of Jehovah God’s impending punishment. At the same time, Jehovah God also heard the prayers from the depths of their hearts entreating Him to cease His anger against them so that they might avoid this catastrophe. When God observed all these facts, little by little His anger disappeared. Regardless of how great His anger had previously been, when He saw the sincere repentance in the depths of these people’s hearts His heart was touched by this, and so He could not bear to bring the catastrophe upon them, and He ceased to be angry at them. Instead He continued to extend His mercy and tolerance toward them and continued to guide and supply them.

Previous： If Your Belief in God Is True, You Will Receive His Care Often