5. The essential differences between the incarnate God and those who are used by God

I. One Must Bear Witness to the Truths Concerning God’s Incarnation

I. One Must Bear Witness to the Truths Concerning God’s Incarnation

5. The essential differences between the incarnate God and those who are used by God 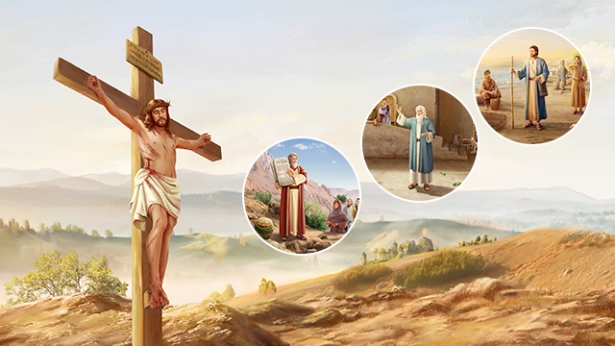 “I indeed baptize you with water to repentance. but He that comes after me is mightier than I, whose shoes I am not worthy to bear. He shall baptize you with the Holy Spirit, and with fire” (Mat 3:11).

The incarnate God is called Christ, and Christ is the flesh donned by the Spirit of God. This flesh is unlike any man that is of the flesh. This difference is because Christ is not of flesh and blood but is the incarnation of the Spirit. He has both a normal humanity and a complete divinity. His divinity is not possessed by any man. His normal humanity sustains all His normal activities in the flesh, while His divinity carries out the work of God Himself. Be it His humanity or divinity, both submit to the will of the heavenly Father. The substance of Christ is the Spirit, that is, the divinity. Therefore, His substance is that of God Himself; this substance will not interrupt His own work, and He could not possibly do anything that destroys His own work, nor would He ever utter any words that go against His own will. …

… God Himself has no elements of disobedience; His substance is good. He is the expression of all beauty and goodness, as well as all love. Even in the flesh, God does not do any that disobeys God the Father. Even at the expense of sacrificing His life, He would be whole-heartedly willing and make no other choice. God has no elements of self-rightness and self-importance, or those of conceit and arrogance; He has no elements of crookedness. All that disobeys God comes from Satan; Satan is the source of all ugliness and wickedness. The reason that man has qualities alike those of Satan is because man has been corrupted and worked on by Satan. Christ has not been corrupted by Satan, hence He has only the characteristics of God and none of those of Satan.

The flesh worn by the Spirit of God is God’s own flesh. The Spirit of God is supreme; He is almighty, holy, and righteous. So likewise, His flesh is also supreme, almighty, holy, and righteous. Flesh such as that is only able to do that which is righteous and beneficial to mankind, that which is holy, glorious, and mighty, and is incapable of doing anything that violates the truth or morality and justice, much less anything that betrays God’s Spirit. The Spirit of God is holy, and thus His flesh is incorruptible by Satan; His flesh is of a different essence than the flesh of man. For it is man, not God, who is corrupted by Satan; Satan could not possibly corrupt the flesh of God. Thus, despite the fact that man and Christ dwell within the same space, it is only man who is occupied, used, and entrapped by Satan. By contrast, Christ is eternally impervious to Satan’s corruption, because Satan will never be capable of ascending to the place of the most high, and will never be able to draw near to God. Today, you should all understand that it is only mankind, which has been corrupted by Satan, who betrays Me, and that this problem will always be irrelevant for Christ.

from “A Very Serious Problem: Betrayal (2)” in The Word Appears in the Flesh

The incarnate God is substantively different from the people used by God. The incarnate God is able to do the work of divinity, whereas the people used by God are not. At the beginning of each age, God’s Spirit speaks personally and launches the new era to bring man into a new beginning. When He has finished speaking, this signifies that God’s work within His divinity is done. Thereafter, people all follow the lead of those used by God to enter into their life experience.

Though the incarnate God possesses a normal human mind, His work is not adulterated by human thought; He undertakes the work in the humanity with a normal mind, under the precondition that He possesses the humanity with a mind, not by the exercise of normal human thought. No matter how lofty the thoughts of His flesh are, His work does not bear the stamp of logic or thinking. In other words, His work is not conceived by the mind of His flesh, but is a direct expression of the divine work in His humanity. All of His work is the ministry He needs to fulfill, and none of it is conceived by His brain. For example, healing the sick, casting out demons, and the crucifixion were not products of His human mind, could not have been achieved by any man with a human mind. Likewise, the conquering work of today is a ministry that must be performed by the incarnate God, but it is not the work of a human will, it is the work His divinity should do, work of which no fleshly human is capable.

The people that God has used throughout the ages have all been capable of normal thought and reason. They have all understood the principles of human conduct. They have had normal human ideas, and have been possessed of all the things that ordinary people should possess. Most of them have had exceptional talent and innate intelligence. In working upon these people, God’s Spirit harnesses their talents, which are their God-given gifts. God’s Spirit brings their talents into play, using their strengths in God’s service. Yet the substance of God is without ideas or thought, unadulterated with human intentions, and even lacks what normal humans possess. Which is to say, He is not even conversant with the principles of human conduct. This is how it is when today’s God comes to the earth. His work and His words are unadulterated with human intentions or human thought, but they are a direct manifestation of the intentions of the Spirit, and He works directly on God’s behalf. This means that the Spirit directly speaks, that is, the divinity directly does the work, without mixing in even one bit of man’s intentions. In other words, the incarnate God embodies divinity directly, is without human thought or ideas, and has no understanding of the principles of human conduct. If only divinity were at work (meaning if only God Himself were at work), there would be no way for God’s work to be carried out on earth. So when God comes to earth, He must have a small number of people He uses to work within humanity in conjunction with the work that God does in divinity. In other words, He uses human work to uphold His divine work. If not, there would be no way for man to directly engage with the divine work.

My speech represents My being, but what I say is beyond the reach of man. What I say is not that which man experiences, and it is not something that man can see, it is also not something that man can touch, but it is what I am. Some people only acknowledge that what I fellowship is what I have experienced, but they do not recognize that it is the direct expression of the Spirit. Of course, what I say is what I have experienced. It is I who have done the management work over six thousand years. I have experienced everything from the beginning of the creation of mankind until now; how would I not be able to talk about it? When it comes to man’s nature, I have seen it clearly, and I have long since observed it; how would I not be able to talk about it clearly? Since I have seen the essence of man clearly, I am qualified to chastise man and judge him, because all of man came from Me but has been corrupted by Satan. Of course, I am also qualified to assess the work that I have done. Although this work is not done by My flesh, it is the direct expression of the Spirit, and this is what I have and what I am. Therefore, I am qualified to express it and to do the work that I ought to do. What man says is what they have experienced. It is what they have seen, what their minds can reach and what their senses can feel. That is what they can fellowship. The words spoken by God’s incarnate flesh are the direct expression of the Spirit and express the work that has been done by the Spirit. The flesh has not experienced or seen it, but still expresses His being because the substance of the flesh is the Spirit, and He expresses the work of the Spirit. Even though the flesh is unable to reach it, it is the work already done by the Spirit. After incarnation, through the expression of the flesh, He enables people to know God’s being and allows people to see God’s disposition and the work that He has done. The work of man enables people to be more clear about what they should enter into and what they should understand; it involves leading people toward understanding and experiencing the truth. Man’s work is to sustain people; God’s work is to open up new paths and open up new eras for humanity, and to reveal to people that which is not known by mortals, enabling them to know His disposition. God’s work is to lead all of humanity.

A man used by God is not the incarnate God, and the incarnate God is not a man used by God; in this, there is a substantial difference. … The words of God incarnate initiate a new age, guide the whole of mankind, reveal mysteries, and show man the direction ahead in a new age. The enlightenment obtained by man is but simple practice or knowledge. It cannot guide the whole of mankind into a new age or reveal the mystery of God Himself. God, after all, is God, and man is man. God has the substance of God, and man has the substance of man. If man views the words spoken by God as simple enlightenment of the Holy Spirit, and takes the words of the apostles and prophets as words personally spoken by God, then man is wrong.

from Preface to The Word Appears in the Flesh

Previous：Why doesn’t God use man to do His work of judgment in the last days; why must He incarnate and do it Himself?

Next：Why is it said that corrupt mankind needs salvation by the Incarnate God most of all?