Jesus’ Rebuke to the Pharisees

10. The Pharisees’ Judgment on Jesus

Mak 3:21–22 And when His friends heard of it, they went out to lay hold on Him: for they said, He is beside Himself. And the scribes which came down from Jerusalem said, He has Beelzebub, and by the prince of the devils casts He out devils.

11. Jesus’ Rebuke to the Pharisees

The content of the two passages above is different. Let us first take a look at the first passage: The Pharisees’ Judgment on Jesus.

In the Bible, the Pharisees’ appraisal of Jesus Himself and the things that He did was: “[T]hey said, He is beside Himself. … He has Beelzebub, and by the prince of the devils casts He out devils” (Mak 3:21–22). The scribes’ and Pharisees’ judgment of the Lord Jesus was not them merely imitating other people’s words, and neither was it baseless conjecture—it was the conclusion that they drew about the Lord Jesus from what they saw and heard of His actions. Although their conclusion was ostensibly made in the name of justice and appeared to people as if it were well-founded, the arrogance with which they judged the Lord Jesus was difficult for even them to contain. The frenzied energy of their hatred for the Lord Jesus exposed their own wild ambitions and their evil satanic countenances, as well as their malevolent nature with which they resisted God. These things that they said in their judgment of the Lord Jesus were driven by their wild ambitions, jealousy, and the ugly and malevolent nature of their hostility toward God and the truth. They did not investigate the source of the Lord Jesus’ actions, nor did they investigate the essence of what He said or did. Rather, blindly, in a state of crazed agitation, and with deliberate malice, they attacked and discredited what He had done. They went so far as to willfully discredit His Spirit, that is, the Holy Spirit which is God’s Spirit. This is what they meant when they said, “He is beside Himself,” “Beelzebub,” and “the prince of the devils.” That is to say, they said that the Spirit of God was Beelzebub and the prince of the devils. They characterized as madness the work of God’s Spirit incarnate, which had clothed Himself in flesh. They not only blasphemed God’s Spirit as Beelzebub and the prince of the devils, but also condemned God’s work and condemned and blasphemed the Lord Jesus Christ. The essence of their resistance and blasphemy of God was entirely the same as the essence of the resistance and blasphemy of God given by Satan and the demons. They did not just represent corrupt humans, but more so they were the embodiment of Satan. They were a channel for Satan amongst mankind, and they were the accomplices and lackeys of Satan. The essence of their blasphemy and their denigration of the Lord Jesus Christ was their struggle with God for status, their contest with God, and their unending testing of God. The essence of their resistance to God and their attitude of hostility toward Him, as well as their words and their thoughts, directly blasphemed and angered God’s Spirit. Thus, God determined a reasonable judgment based on what they said and did, and God determined their deeds to be the sin of blasphemy against the Holy Spirit. This sin is unforgivable in both this world and the world to come, as is borne out in the following passage of scripture: “[T]he blasphemy against the Holy Spirit shall not be forgiven to men,” and, “whoever speaks against the Holy Spirit, it shall not be forgiven him, neither in this world, neither in the world to come.” Today, let us talk about the true meaning of these words from God: “[I]t shall not be forgiven him, neither in this world, neither in the world to come.” That is, let us demystify how God fulfills the words: “[I]t shall not be forgiven him, neither in this world, neither in the world to come.” 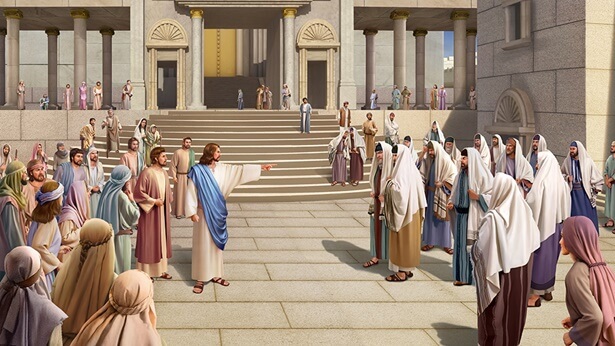 All of the above is a complete explanation of the words: “[I]t shall not be forgiven him, neither in this world, neither in the world to come,” and it also serves as a simple commentary on these passages from the scriptures. I believe you all have an understanding of it now.

Excerpted from “God’s Work, God’s Disposition, and God Himself III” in The Word Appears in the Flesh

Previous: Jesus Performs Miracles
Next: Jesus’ Words to His Disciples After His Resurrection
At this critical moment of welcoming the Lord’s return, how can we welcome the Lord? How can we escape sin and enter the heavenly kingdom? Please join our study group to find out.

In God’s eyes, as long as they are living creatures that He Himself created, He will manage and care for them; He will treat them, plan for them, and rule them in different ways. These are the thoughts and attitude of God toward all things.

Jesus’ Words to His Disciples After His Resurrection

Jesus had come from God, that He was God incarnate, and He used the fact of His appearance and His resurrection as the greatest vision and motivation for mankind’s lifelong pursuit. His resurrection from death not only strengthened all those who followed Him, but also thoroughly put His work of the Age of Grace into effect among mankind, and thus the gospel of the Lord Jesus’ salvation in the Age of Grace gradually spread to every corner of humanity.

Next, let us take a look at the last sentence in this passage: “For the Son of man is Lord even of the sabbath day.” Is there a practical...