On the Fourth Day, the Seasons, Days, and Years of Mankind Come Into Being as God Exerts His Authority Once Again

The Creator used His words to accomplish His plan, and in this way He passed the first three days of His plan. During these three days, God was not seen to busy about, or to exhaust Himself; on the contrary, He passed a wonderful first three days of His plan, and achieved the great undertaking of the world’s radical transformation. A brand new world appeared before His eyes, and, piece by piece, the beautiful picture that had been sealed within His thoughts was finally revealed in the words of God. The appearance of each new thing was like the birth of a newborn baby, and the Creator took pleasure in the picture that had once been in His thoughts, but which had now been brought to life. At this time, His heart gained a sliver of satisfaction, but His plan had only just begun. In the blink of an eye, a new day had arrived—and what was the next page in the Creator’s plan? What did He say? And how did He exert His authority? And, at the same time, what new things came into this new world? Following the guidance of the Creator, our gaze falls on the fourth day of God’s creation of all things, a day which was yet another new beginning. Of course, for the Creator, it was undoubtedly another wonderful day, and another day of the utmost importance for the mankind of today. It was, of course, a day of inestimable value. How was it wonderful, how was it so important, and how was it of inestimable value? Let us first listen to the words spoken by the Creator….

“And God said, Let there be lights in the firmament of the heaven to divide the day from the night; and let them be for signs, and for seasons, and for days, and years: And let them be for lights in the firmament of the heaven to give light on the earth” (Gen 1:14–15). This was another exertion of God’s authority that was shown forth by creatures following His creation of dry land and the plants within it. For God, such an act was equally easy, because God has such power; God is as good as His word, and His word shall be accomplished. God ordered lights to appear in the heaven, and these lights not only shone in the sky and upon the earth, but also served as signs for day and night, for seasons, days, and years. In this way, as God spoke His words, every act that God wished to achieve was fulfilled according to God’s meaning and in the manner appointed by God. 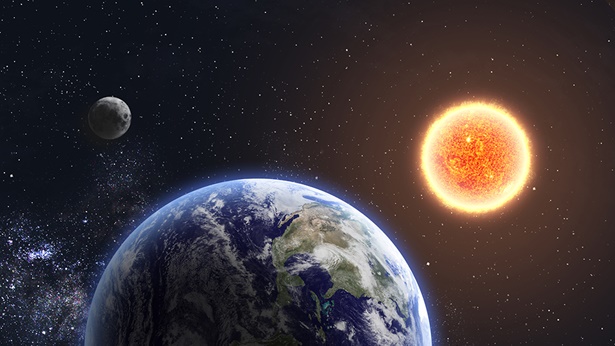 The lights in the heaven are matter in the sky that can radiate light; they can illuminate the sky, and can illuminate the land and seas. They revolve according to the rhythm and frequency commanded by God, and light up different time periods upon land, and in this way revolution cycles of the lights cause day and night to be produced in the east and west of the land, and they are not only signs for night and day, but through these different cycles they also mark the feasts and various special days of mankind. They are the perfect complement and accompaniment to the four seasons—spring, summer, autumn, and winter—issued forth by God, together with which the lights harmoniously serve as regular and accurate marks for the lunar terms, days, and years of mankind. Although it was only after the advent of farming that mankind began to understand and encounter the separation of lunar terms, days, and years caused by the lights created by God, in fact the lunar terms, days, and years that man understands today began to be produced long ago on the fourth day of God’s creation of all things, and so too did the interchanging cycles of spring, summer, autumn, and winter experienced by man begin long ago on the fourth day of God’s creation of all things. The lights created by God enabled man to regularly, precisely, and clearly differentiate between night and day, and count the days, and clearly keep track of the lunar terms and years. (The day of the full moon was the completion of one month, and from this man knew that the illumination of lights began a new cycle; the day of the half moon was the completion of one half of a month, which told man that a new lunar term began, from which it could be inferred how many days and nights were in a lunar term, how many lunar terms were in a season, and how many seasons were in a year, and all was regularly displayed.) And so, man could easily keep track of the lunar terms, days, and years marked by the revolutions of the lights. From this point onward, mankind and all things unconsciously lived amongst the orderly interchange of night and day and alternations of the seasons produced by the revolutions of the lights. This was the significance of the Creator’s creation of the lights on the fourth day. Similarly, the aims and significance of this action of the Creator were still inseparable from His authority and power. And so, the lights made by God and the value that they would soon bring to man were another masterstroke in the exertion of the Creator’s authority.

The Creator’s authority and power produce miracle after miracle, and He attracts man’s attention, and man cannot help but stare transfixed at the astounding deeds born from the exertion of His authority. His phenomenal power brings delight after delight, and man is left dazzled and overjoyed, and he gasps in admiration, is awestruck, and cheers; what’s more, man is visibly moved, and there is produced in him respect, reverence, and attachment. The authority and deeds of the Creator have a great impact upon the spirit of man, and cleanse the spirit of man, and, moreover, sate the spirit of man. Every one of His thoughts, every one of His utterances, and every revelation of His authority is a masterpiece among all things, and is a great undertaking most worthy of the created mankind’s deep understanding and knowledge. When we count every creature born from the words of the Creator, our spirits are drawn to the wonder of God’s power, and we find ourselves following the footprints of the Creator to the next day: the fifth day of God’s creation of all things.

Previous： On the Third Day, the Words of God Give Birth to the Earth and the Seas, and the Authority of God Causes the World to Brim With Life

Next： On the Fifth Day, Life of Varied and Diverse Forms Exhibits the Authority of the Creator in Different Ways