Gospel Movie Clip (4) – Why Does God Twice Become Flesh in Order to Save Mankind?

Clip "The Mystery of Godliness: The Sequel" (6) - Is the Lord Jesus the Son of God or God Himself?

Gospel Movie Clip "The Mystery of Godliness: The Sequel" (2) - How to Understand God Incarnate

Gospel Movie Clip (4) - Why Does God Twice Become Flesh in Order to Save Mankind?

Gospel Movie "Rapture in Peril" - What Is the Essential Difference Between the Incarnate God and People Used by God?

Gospel Movie Clip (4) - Why Does God Twice Become Flesh in Order to Save Mankind?

In the Age of Grace, God incarnate was nailed to the cross, taking upon Himself the sins of man and completing the work of redeeming mankind. In the last days, God has once again incarnated to express the truth and to thoroughly purify and save man. So why does God need to incarnate twice to do the work of the salvation of man? Almighty God says, "The first incarnation was to redeem man from sin, to redeem him by means of the fleshly body of Jesus, that is, He saved man from the cross, but the corrupt satanic disposition still remained within man. The second incarnation is no longer to serve as a sin offering but rather to save fully those who were redeemed from sin. This is done so that those who have been forgiven may be delivered from their sins and made fully clean, and by attaining a changed disposition, break free of Satan's influence of darkness and return before the throne of God. Only in this way can man be fully sanctified. … The second incarnation will be sufficient to purge away the sins of man and to fully purify him. Hence, with the second incarnation, the entirety of God's work in the flesh will be brought to a close and the significance of God's incarnation be made complete" (The Word Appears in the Flesh). 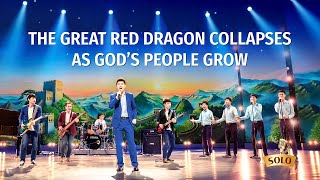 Gospel Movie Clip "Faith in God" (6) - What Does True Faith in God Mean?

Gospel Movie Clip "Faith in God" (3) - What Do God's Work and Appearance Bring to the Religious Community?

Gospel Movie "Disclose the Mystery About the Bible" (1) - Uncovered: Are There Any Words or Work of God Besides Those in the Bible?

Gospel Movie Clip "Yearning" (5) - Where Is the Place That the Lord Has Prepared for Us?

Movie Clip (1) - How Do We Treat Eastern Lightning in a Way That Accords With the Lord's Will?