"The Incarnate God Is Most Lovable" | New English Gospel Song

2019 English Christian Song | "You Should Know God Through His Work"

2019 Christian Song "God Treats Man as His Dearest One"

Gospel Song | "A Different Age, Different Divine Work" | Do You Know the Work of God in the New Age?

Christian Worship Song | "The Principles for Seeking the True Way"

Best Christian Song | "The Inner Meaning of the Work of Conquest"

Gospel Music "Christ's Substance Is Determined by His Work and Expressions"

Christian English Song | "Humanity’s Only Path to Enter Into Rest"

Christian Song | "Christ Is the Incarnate God Himself" | Eastern Lightning

Do You Really Know the Returned Jesus Christ? | Gospel Music "The Identity of Christ Is God Himself"

2019 English Christian Song "Our God Reigns as King" | The God Almighty Is My Lord, My God

Praise the Coming of God | Christian Song | "The Kingdom Anthem III All People, Shout for Joy"

Christian Worship Song | The Power of God's Word | "In the Age of Kingdom, the Word Accomplishes Everything"

A Hymn of God's Words "Two Thousand Years of Longing"

A Hymn of God's Words "The Significance of God's Two Incarnations"

A Hymn of God's Words "To Gain Eternal Life, You Must Know the Source of It"

A Hymn of God's Words "God Laments the Future of Mankind"

A Hymn of God's Words "True Meaning of Faith in God"

The Hymn of God's Word "The Seven Thunders Roll"

The Hymn of God's Word "God Becomes Flesh to Save Mankind"

The Hymn of God's Word "God's Open Administration Throughout the Universe"

The Hymn of God's Word "God's Disposition Is Lofty and Grand"

The Hymn of God's Word "The Symbols of God's Victory"

A Hymn of God's Word "God's Care Is Always With Mankind"

The Hymn of God's Word "Do You Wish to Know the Root of Why the Pharisees Opposed Jesus?"

A Hymn of God's Word "A River of Water of Life"

A Hymn of God's Word "The Symbol of God’s Disposition"

The Hymn of God's Word "God Descends With Judgment"

A Hymn of God's Word "The Significance of God’s Name"

Gospel Music "Since God Saves Man, He Will Save Him Completely"

A Hymn of God's Word "Rise up, Cooperate With God" | Eastern Lightning

A Hymn of God's Word "Fallen Is Babylon the Great"

Gospel Music "God Is Seeking Your Heart and Your Spirit"

When God’s divinity was realized in flesh and blood,

His presence was no longer hazy.

Man could see and draw near to God.

They could try and comprehend God’s will, understand His divinity

through the words, work, and actions of the Son of man.

Through humanity, the Son of man expressed

God’s will and His divinity.

And through showing God’s will and disposition,

He revealed to people the God in the realm of the spirit,

who can’t be touched or seen.

They saw a God with flesh and image.

So the incarnate Son of man

Whether it is His humanity or divinity,

God worked and spoke through the flesh

With the identity of the Son of man, He stood before mankind,

letting them encounter God’s words and work among humanity,

know His divinity and greatness in the midst of humility.

Man gets a sense of God’s realness, a taste of His reality.

Man gains a grasp on what they mean.

Through humanity, the Son of man expressed

God’s will and His divinity.

And through showing God’s will and disposition,

He revealed to people the God in the realm of the spirit,

who can’t be touched or seen.

They saw a God with flesh and image.

Though the work, ways, and perspective of speaking

of the Lord Jesus were unlike

God’s real person in the realm of the spirit,

This cannot be denied. 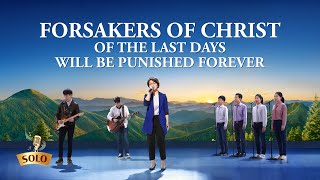 Gospel Movie Clip "Yearning" (2) - Do You Understand the Mystery of God's Appearance?

Clip "The Gospel Messenger" (1) - What Did the Lord Jesus Mean When He Said "It Is Finished" on the Cross?

Do You Really Know the Returned Jesus Christ? | Gospel Music "The Identity of Christ Is God Himself"

Gospel Movie Clip (2) - Is There a Basis in the Bible for the Lord's Return Through Incarnation?