What are the differences between the words of God conveyed by prophets in the Age of Law, and the words expressed by God incarnate? 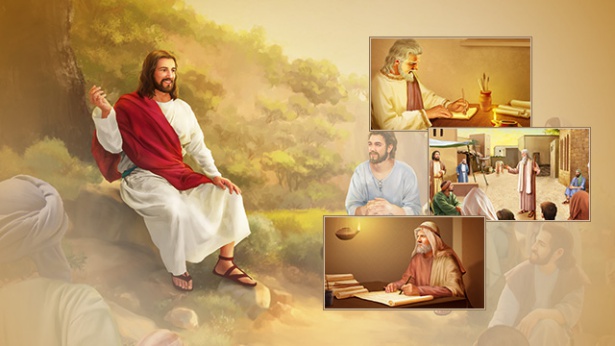 In the Age of Grace, Jesus also spoke many words and did much work. How was He different from Isaiah? How was He different from Daniel? Was He a prophet? Why is it said that He is Christ? What are the differences between them? They were all men who spoke words, and their words appeared more or less the same to man. They all spoke words and did work. The prophets of the Old Testament spoke prophecies, and similarly, so could Jesus. Why is this so? The distinction here is based on the nature of the work. To discern this matter, you must not consider the nature of the flesh, nor should you consider the depth or superficiality of their words. Always you must first consider their work and the effects their work achieves in man. The prophecies spoken by the prophets at the time did not supply the life of man, and the inspirations received by those such as Isaiah and Daniel were merely prophecies, and not the way of life. If not for the direct revelation of Jehovah, none could have done that work, which is not possible for mortals. Jesus, too, spoke many words, but such words were the way of life from which man could find a path to practice. That is to say, first, He could supply the life of man, for Jesus is life; second, He could reverse the deviations of man; third, His work could succeed that of Jehovah in order to carry on the age; fourth, He could grasp the needs within man and understand what man lacks; fifth, He could usher in a new age and conclude the old. That is why He is called God and Christ; not only is He different from Isaiah but also from all other prophets. Take Isaiah as a comparison for the work of the prophets. First, he could not supply the life of man; second, he could not usher in a new age. He was working under the leadership of Jehovah and not to usher in a new age. Third, the words he spoke were beyond him. He was receiving revelations directly from the Spirit of God, and others would not understand, even having listened to them. These few things alone are sufficient to prove that his words were no more than prophecies, no more than an aspect of work done in Jehovah’s stead. He could not, however, completely represent Jehovah. He was Jehovah’s servant, an instrument in Jehovah’s work. He was only doing work within the Age of Law and within the scope of the work of Jehovah; he did not work beyond the Age of Law. On the contrary, the work of Jesus differed. He surpassed the scope of Jehovah’s work; He worked as God incarnate and underwent crucifixion in order to redeem all mankind. That is to say, He carried out new work outside of the work done by Jehovah. This was the ushering in of a new age. In addition, He was able to speak of that which man could not achieve. His work was work within the management of God and involved the whole of mankind. He did not work in just a few men, nor was His work meant to lead a limited number of men. As for how God was incarnated as a man, how the Spirit gave revelations at that time, and how the Spirit descended upon a man to do work—these are matters that man cannot see or touch. It is utterly impossible for these truths to serve as proof that He is God incarnate. As such, distinction can only be made among the words and work of God, which are tangible to man. Only this is real. This is because matters of the Spirit are not visible to you and are known clearly only by God Himself, and not even God’s incarnate flesh knows all; you can only verify whether He is God from the work He has done. From His work, it can be seen that, first, He is able to open up a new age; second, He is able to supply the life of man and show man the way to follow. This is sufficient to establish that He is God Himself. At the very least, the work He does can fully represent the Spirit of God, and from such work it can be seen that the Spirit of God is within Him. As the work done by God incarnate was mainly to usher in a new age, lead new work, and open up a new realm, these alone are sufficient to establish that He is God Himself. This thus differentiates Him from Isaiah, Daniel, and the other great prophets.

In this final stage of work, results are achieved through the agency of the word. Through the word, man comes to understand many mysteries and the work that God has done through generations past; through the word, man is enlightened by the Holy Spirit; through the word, man comes to understand the mysteries never before unraveled by past generations, as well as the work of prophets and apostles of times past, and the principles by which they worked; through the word, man also comes to understand the disposition of God Himself, as well as the rebelliousness and resistance of man, and comes to know his own substance. Through these steps of work and through all the words spoken, man comes to know the work of the Spirit, the work God’s incarnate flesh does, and even more, His entire disposition. Your knowledge of God’s work of management over six thousand years was also gained through the word. Was not the knowledge of your former notions and your success in putting them aside also attained through the word? In the previous stage, Jesus worked signs and wonders, but there are no signs and wonders in this stage. Was not your understanding of why He does not reveal signs and wonders also achieved through the word? Therefore, the words spoken in this stage surpass the work done by the apostles and prophets of generations past. Even the prophecies told by the prophets could not have achieved this result. The prophets spoke only prophecies, they spoke of what would happen in the future, but not of the work God wished to do at the time. Nor did they speak to guide men in their lives, or to bestow truths upon men, or to reveal mysteries to them, much less to bestow life. Of the words spoken in this stage, there is prophecy and truth, but mainly these words serve to bestow life upon man. The words at present are unlike the prophecies of the prophets. This is a stage of work for the life of man, to change man’s life disposition, and not for the sake of speaking prophecy.

Previous： What are the differences between the words of people used by God throughout the ages which conform to the truth, and the words of God Himself?

Knowing the Voice of God

Knowing the Voice of God